The Northeast Corridor Superconducting Maglev Project (SCMAGLEV) entails construction of a high-speed rail system between Washington, D.C. and New York City, with the first leg between Washington and Baltimore, MD. The alignment is approximately 35 miles (56 km) in length, with approximately 24 – 28 miles (39-45 km) of tunnel and the remaining at-grade or elevated. The system operates using an electromagnetic levitation system developed and deployed in Japan that achieves an operating speed of 311 mph (500km/h). SCMAGLEV is a technically challenging but innovative project that will reduce travel time between Washington D.C. and Baltimore to 15 minutes, and eventually cover Washington to New York City in an hour. Project challenges include tunneling through water saturated fluvial sediments of the Potomac Group with the potential for mixed-face conditions near the Stations at Baltimore and Washington, D.C. Additionally, planned deep cut-and-cover stations in the middle of downtown Washington, D.C. and the heavily trafficked BWI airport will also present a challenge. 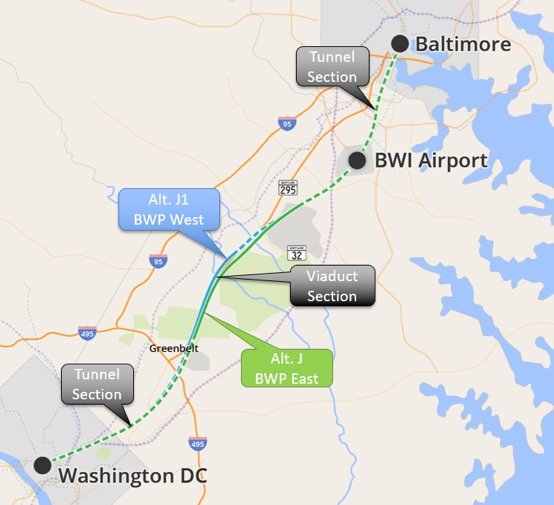 Conceptual rendering of the SCMAGLEV viaduct

Conceptual rendering of the SCMAGLEV viaduct

Gall Zeidler Consultants is the engineer for TBM driven tunnels and underground stations in Washington, DC, at Baltimore Washington International Airport (BWI) and in Baltimore for the project. Initially tasked with development of conceptual engineering to support the Environmental Impact Assessment efforts will lead into preliminary engineering to support the procurement of Design-Build construction contracts.  Among others the services included development and assistance with oversight of the preliminary geotechnical investigation program, station design and engineering, development of tunneling concepts and evaluation of alignment alternatives, tunneling cost assessment, development of construction narratives and spoils management options for the tunnels.  Station concepts utilize deep cut-and cover construction methods and utilization of innovative top-down-methods in Washington, DC along New York Avenue.