The Santa Clara Valley Transportation Authority (VTA) has released an RFQ for its Bay Area Rapid Transit (BART) Silicon Valley Extension Program – Phase II; the largest public infrastructure program ever constructed in Santa Clara County, California.  The released RFQ, Contract Package 2, is a solicitation of Statements of Qualifications (SOQ) from those interested in serving as the Design-Builder for the Tunnel/Trackwork Project.

Phase II of the program will extend BART service from the existing end of the Phase I extension line at the Berryessa/North San Jose BART station, through downtown San Jose, and terminate in the City of Santa Clara.

Gall Zeidler Consultants is an integral part of the Program Management Team for all tunneling aspects and is excited to continue supporting advancement of the project through its next phases.

The RFQ can be viewed here, and Statements of Qualifications are Due February 26th, 2021.

Additional information regarding Phase II of the program can be found here.

If you are interested in GZ’s involvement with the project, visit our project page. 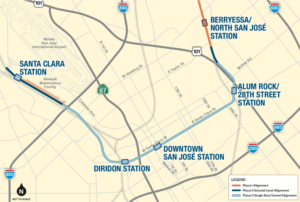