Further progress can be seen on the work of the Plane Train Tunnel at the Hartsfield-Jackson International Airport in Atlanta, Georgia, according to The Atlanta Journal-Constitution. The 700-foot-long tunnel is currently under construction for an extension of the Plane Train track that will enable the airport to add more trains transporting passengers between the terminals and concourses.

The tunnel extension will add a “turn-back” area for trains that will allow the increase in capacity. For passengers it means that the Plane Trains will arrive faster with every 90 seconds instead of every 108 seconds. After the tunnel is completed, the airport plans to increase the number of Plane Trains in its fleet from 11 to 14. Airport officials say that will boost capacity 20% to 12,000 passengers per hour.

The total cost of this mega project amounts to $331 million, and includes includes the excavation and construction of the tunnel, the additional train cars, new elevators and a fourth escalator for passengers getting off the Plane Train at baggage claim. The project has been planned for more than five years and is expected to be finished in May 2024.

For the complete Atlanta Journal-Constitution article please visit this site. 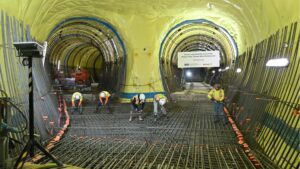